In Part 1 of this series we examined some of the more bland and quite frankly boring, exterior facades for Trader Vic’s. Today we will step it up one notch and take a look at some of the Trader Vic’s locations that made more of a splash with their exteriors. These all had some type of exotic A-frame of Port cochere at their front doors.

The Portland Trader Vic’s was located in the Benson Hotel. 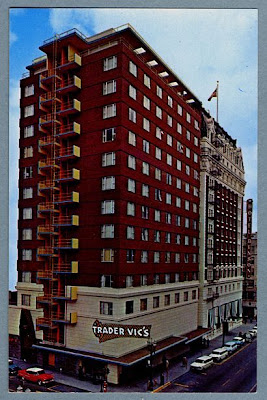 You can see they had large exterior signage for the restaurant and down in the lower left hand corner you can see the street side entrance directly into the lounge. 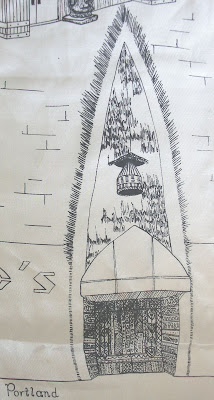 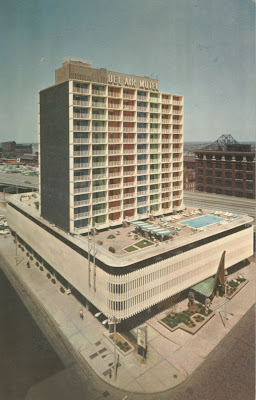 Here we see a different exterior design down in the lower right corner. Note the large three story soaring A-frame at the front door. This was not the thatched version like we saw in Portland, this was a sleeker version, more Asian in design.

Trader Vic’s DC was located in the Hotel Statler. 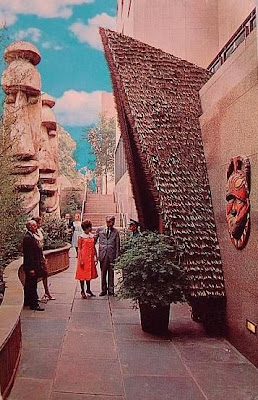 This is the common exterior view for the Washington DC Vic’s. They used a thatched A-Frame over the front door. The inside of the A-frame was decorated with petro glyphs depicting everyday life in the South Seas. The A-frame with the petro glyphs became a very common exterior design for Vic’s and we will see it again many times.

Trader Vic’s NYC existed in two different locations. The original version was located in the Savoy Hilton, it then moved to the Plaza Hotel. Interesting note, at one time the Plaza Hotel was owned by Donald Trump, his then wife Ivana did not like the Trader Vic’s, she thought it was too tacky, so they shut it down. 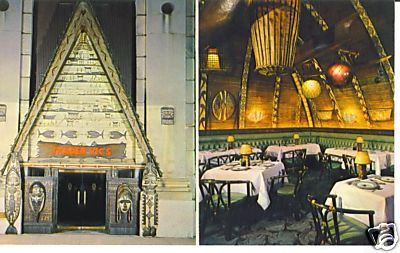 Here you can see the South Seas petro glyphs. 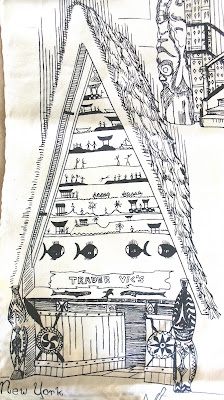 The Trader Vic’s is still located in the Beverly Hilton on Wilshire Boulevard. However, the original location in the hotel was closed in 2009 and it was relocated poolside. The new locale does not have any the charm or atmosphere of the original. 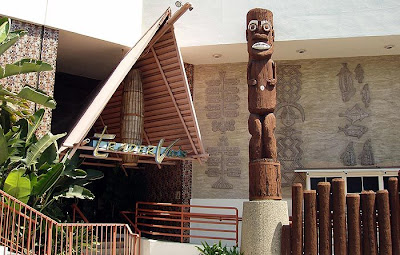 As seen from the parking lot, looking at the street side entrance.

The Beverly Hills Vic’s had these really fantastic murals sculpted into the concrete walls along the front. 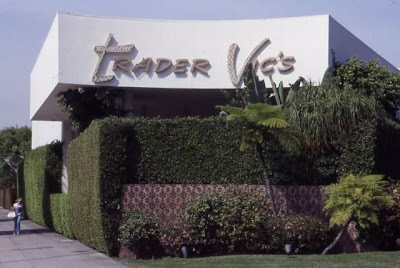 The Beverly Hills Vic’s from the back, as seen along Wilshire Blvd.


The Dallas Vic’s was located in the Dallas Hilton. It opened in 1961 and then closed in the 1980’s. However, when it closed, all they did was shut the doors and kept them locked. The interior remained untouched. Two decades later, the restaurant was reopened in 2007. It was like a time machine stepping inside and traveling back to an original Trader Vic’s. Sadly, shortly after New Year’s eve 2009/2010, the restaurant closed again, this time for good. The interior has been gutted and is being renovated. 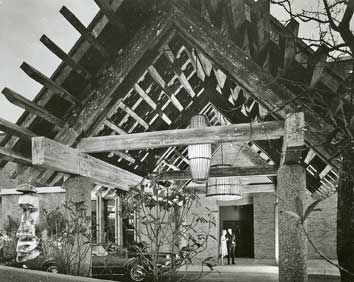 This was the original Port Cochere for the Dallas Vic’s. This time they stepped away from the South Seas design for the exterior and it had more of an Asian flair. This entrance had been demolished and the front entrance had been remodeled at the time of the 2007 reopening.


In Part 3 of this series we will look at the most elaborate of the Trader Vic’s exteriors, the free standing buildings.
Posted by ZuluMagoo at 8:43 AM